Oh, Helen
With looks unparalleled to your.
To have no conscious of one's beauty.
May the pain of the lives fallen,
dwell with you for eternity.

Oh, Penelope
For who came second to Helen.
The eternalness of your affection
and fidelity will not go unnoticed.
For the life in Hades be more than
one could covet.

Oh, Hecuba
For nothing can compare the loss of a child.
The innocence of children have no place for revenge.
One could only accept there wrongdoings.
For only in the hereafter will you receive your
retribution.

Oh, Clytemnestra
For there are certain paths which on takes.
Retaliation on one's foe,
could never end in solace.
With the connection of one's you love,
can only lead to more suffering throughout
the living and the dead.

Oh, Circe
The feelingness of neither god nor human.
For satisfactory things come to those who are patient.
Finding friendship and love
in the most unbelievable situations.
Leads one to have acceptance over one's fate.

Oh, Briseis
For the most beautiful in all of Lyrnessus.
Treated as a pawn in the midst of war,
between two powerful men.
For the three Fates have lost your spun thread.
For beautiful Briseis has cease to be known.

Lastly, Oh, Athena
As the golden child of Zeus.
Born from no womb, no mother.
A true deity for all women.
Needing to not pin one's hope on a partner.
For you are a symbol of independence, strength and resilience
to all women for all eternity.

This is a statue of Greek Goddess Athena. She was the only child of Zeus not birthed from a woman but straight out of Zeus's head. She was believed to be the Goddess of Wisdom and War, and the favorite child of Zeus. This statue was found in rubble at the east end of the library of Pergamon. The sculptor is unknown, but you can see this restored sculpture at the Pergamon Museum, Berlin. 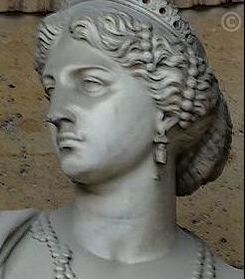 This is a Statue of the Greek Goddess Circe. She was also referred to as a sorceress or a witch in Greek Mythology. She could easily turn her foes into animals by her knowledge of herbs and potions or with her staff. This sculpture is actually a full body sculpture sculpted by Charles Gumery, and can be seen on the Aile Sud facade of the Louvre Museum. 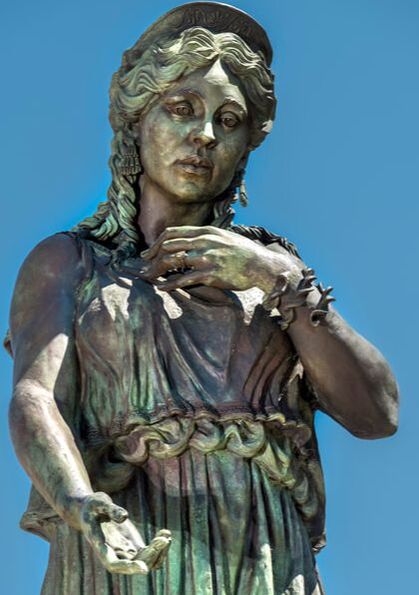 This is a bronze statue of Hecuba she was the wife of King Priam and Queen of Troy. She birthed 19 children including the famous Hector, Paris and Cassandra. The Statue of Hecuba you wouldn't have to go overseas to see. It's located at he University of Southern California. Sculpted by Christopher Slatoff. USC's president said, "Hecuba was a model of resilience. She urged the Trojans to fight on “even when they were outnumbered, exhausted, facing impossible odds.” 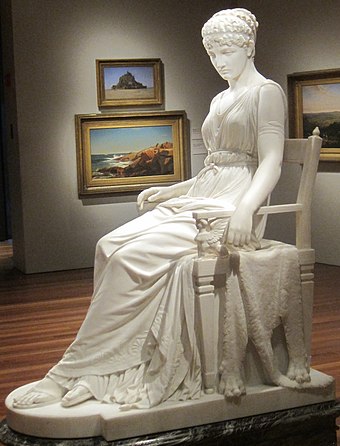 This is Penelope Queen of Ithaca. She was the loyal wife of Odysseus. She bares one son Telemachus who was born just before Odysseus leaves to fight in the Trojan War. She waited over 20 years to see Odysseus. This marble statue by Franklin Simmons can be found on display at the De Young Museum in San Fransisco.

This is a statue of Helen. Daughter of Zeus and Leda. Said to be the most beautiful woman in the world. Once Helen of Sparta married to King Menelaus. Abducted by Paris to then become Helen of Troy. Being the cause of the great Trojan War. Made of marble. It is also located where the statue of Circe is located at the Aile Lescot facade of the former Palais du Louvre, and it was sculpted by Antoine Etex.

This is Clytemnestra wife of King Agamemnon. She was the Queen of Mycenae. Mother of Orestes, Electra and Iphigenia. She is famous for seeking revenge and killing her husband Agamemnon for sacrificing their daughter Iphigenia just to be ahead in the Trojan War. This is an oil painting two and a half meters in height by Artist John Collier. Located in the Worcester City Art Museum in the UK. 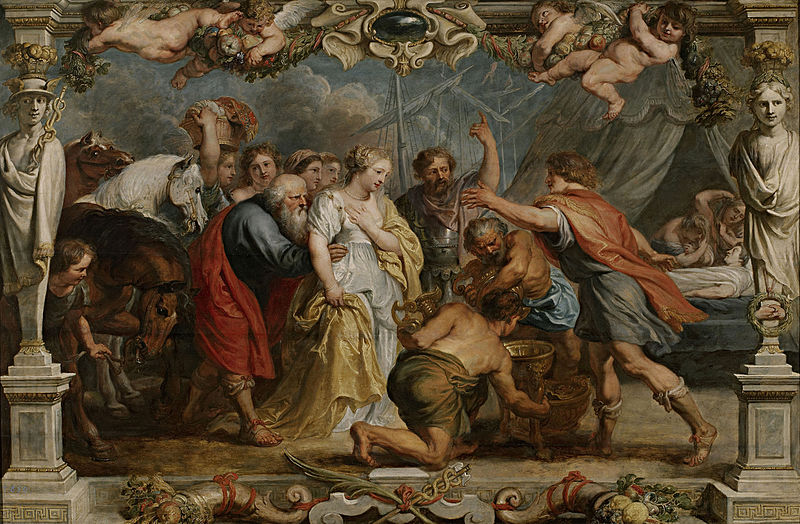 This is Briseis. She was a war prize, to Achilles. Agamemnon took Briseis and caused a great argument between Agamemnon and Achilles, Achilles refused to fight on against the Trojans, resulting in the Achaeans coming close to defeat. The return of Briseis, along with the death of Patroclus, would see Achilles return to the fight once again to win the Trojan War. This is an oil painting created by Peter Paul Ruebens. Located at the Prado Museum.
References for Oh, Women of Myths